“Annali di Storia dell’Esegesi” (ASE) is a semestral journal devoted to the history of Christianity and the interpretation of the Bible, with editorial boards in Europe and North America. Launched in 1984, the journal has now become a reference point for religious studies, reflecting a wide range of approaches and perspectives. View the latest issue»

Proceedings of the CISSR Annual Meetings

The Proceedings of the first two Annual Meetings on Christian Origins have been published by Brepols in the JAOC series (“Judaïsme ancien et origines du christianisme”). 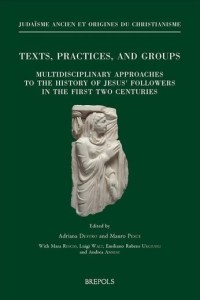 Within the contemporary renewal of the exegetical and historical research on Jesus and early Christianity, this book focuses on a wider knowledge of the social and cultural context of the first two centuries, thanks to a systematic research of documentary materials and archaeological data (epigraphs and documentary papyri). Secondly, the book faces the increasingly perceived need to use all the existing literary material for the reconstruction of the historical Jesus and the first groups of his followers. Thirdly, the book stresses the importance of giving space to new epistemological and methodological perspectives in the field of human sciences. The last section of the volume is dedicated to the connection of contemporary research with the interpretations of Jesus and early Christianity developed in the modern age.

Table of contents and other info at the publisher’s website»

This book provides a survey on new methodologies for the study of Jesus and Early Christianity and on the parting of the ways of the post-Jesus movement from Jewish to Roman-Hellenistic cultures. The articles in the first section present a consequent interpretation of Jesus within first-century Jewish culture. Jesus’ activity is located within the Jewish movement of John the Baptizer. His words and political attitudes are interpreted in the Jewish context of the Land of Israel under Roman administration. His movement is seen as a sub-group within Jewish society. The section dedicated to the first groups of Jesus’ disciples in the Land of Israel and in the ancient Mediterranean world manly focuses on three constellations of questions: (a) the multiplicity and fractionation of Jesus groups, for example in Jerusalem in the period between 30 and 70 of the first century; (b) the fact that the post-Jesus movement was sociologically characterized by a multiplicity of sub-groups of Jewish groups and movements; (c) the radical modifications provoked by the abandonment of Jewish contexts when the majority of followers was composed by Gentiles with limited relation with the daily practice of Jewish life and religion. Particular attention is dedicated to the connection of contemporary research with the interpretations of Jesus and early Christianity developed in the modern age.

Table of contents and other info at the publisher’s website»

The Italian Centre for Advanced Studies on Religions (CISSR) promotes the scientific research on religion, with a special focus on the history of Christianity and Judaism. The Centre fosters the development of religious studies in the academy, by organizing scientific meetings, providing support for post-graduate studies, and sponsoring cultural initiatives and workshops.